The diagram above shows the interactions between the major components of JerryScript: Parser and Virtual Machine (VM). Parser performs translation of input ECMAScript application into the byte-code with the specified format (refer to Bytecode and Parser page for details). Prepared bytecode is executed by the Virtual Machine that performs interpretation (refer to Virtual Machine and ECMA pages for details).

The parser is implemented as a recursive descent parser. The parser converts the JavaScript source code directly into byte-code without building an Abstract Syntax Tree. The parser depends on the following subcomponents.

The lexer splits input string (ECMAScript program) into sequence of tokens. It is able to scan the input string not only forward, but it is possible to move to an arbitrary position. The token structure described by structure lexer_token_t in ./jerry-core/parser/js/js-lexer.h.

Scanner (./jerry-core/parser/js/js-parser-scanner.c) pre-scans the input string to find certain tokens. For example, scanner determines whether the keyword for defines a general for or a for-in loop. Reading tokens in a while loop is not enough because a slash (/) can indicate the start of a regular expression or can be a division operator.

Expression parser is responsible for parsing JavaScript expressions. It is implemented in ./jerry-core/parser/js/js-parser-expr.c.

JavaScript statements are parsed by this component. It uses the Expression parser to parse the constituent expressions. The implementation of Statement parser is located in ./jerry-core/parser/js/js-parser-statm.c.

Function parser_parse_source carries out the parsing and compiling of the input ECMAScript source code. When a function appears in the source parser_parse_source calls parser_parse_function which is responsible for processing the source code of functions recursively including argument parsing and context handling. After the parsing, function parser_post_processing dumps the created opcodes and returns an ecma_compiled_code_t* that points to the compiled bytecode sequence.

The interactions between the major components shown on the following figure. 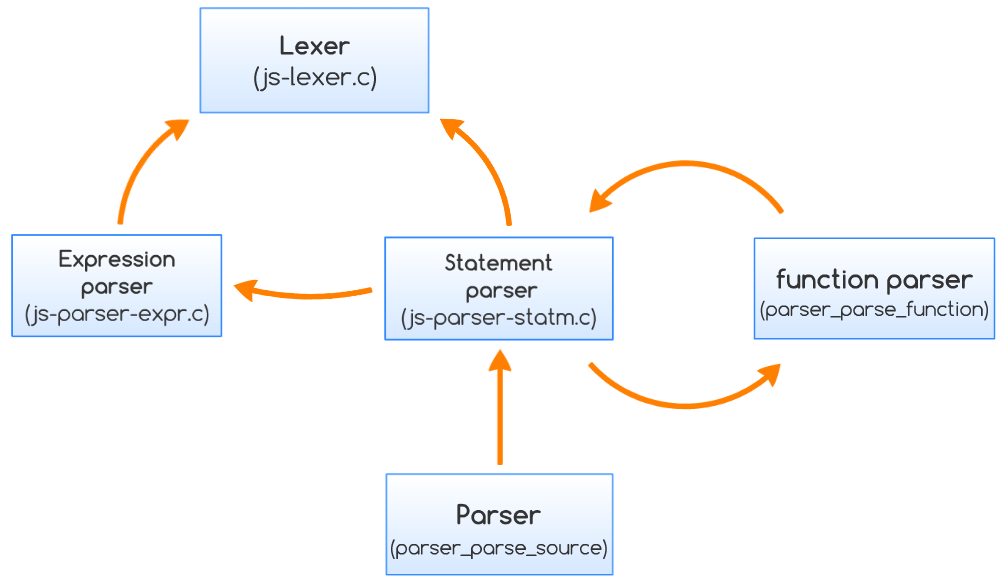 CBC is a CISC like instruction set which assigns shorter instructions for frequent operations. Many instructions represent multiple atomic tasks which reduces the bytecode size. This technique is basically a data compression method.

The memory layout of the compiled bytecode is the following.

The header is a cbc_compiled_code structure with several fields. These fields contain the key properties of the compiled code.

The literals part is an array of ecma values. These values can contain any ECMAScript value types, e.g. strings, numbers, functions and regexp templates. The number of literals is stored in the literal_end field of the header.

CBC instruction list is a sequence of bytecode instructions which represents the compiled code.

The memory layout of a byte-code is the following:

There are three types of bytecode arguments in CBC:

Argument combinations are limited to the following seven forms:

The two major group of literals are identifiers and values.

There are two types of literal encoding in CBC. Both are variable length, where the length is one or two byte long.

Since most functions require less than 255 literal, small encoding provides a single byte literal index for all literals. Small encoding consumes less space than full encoding, but it has a limited range.

Byte-codes can be placed into four main categories.

The byte-codes of this category perform calls in different ways.

The opcodes of this category perform arithmetic, logical, bitwise and assignment operations.

Branch byte-codes are used to perform conditional and unconditional jumps in the byte-code. The arguments of these instructions are 1-3 byte long relative offsets. The number of bytes is part of the opcode, so each byte-code with a branch argument has three forms. The direction (forward, backward) is also defined by the opcode since the offset is an unsigned value. Thus, certain branch instructions has six forms. Some examples can be found in the following table.

The compiled byte-code can be saved into a snapshot, which also can be loaded back for execution. Directly executing the snapshot saves the costs of parsing the source in terms of memory consumption and performance. The snapshot can also be executed from ROM, in which case the overhead of loading it into the memory can also be saved.

Virtual machine is an interpreter which executes byte-code instructions one by one. The function that starts the interpretation is vm_run in ./jerry-core/vm/vm.c. vm_loop is the main loop of the virtual machine, which has the peculiarity that it is non-recursive. This means that in case of function calls it does not calls itself recursively but returns, which has the benefit that it does not burdens the stack as a recursive implementation.

ECMA component of the engine is responsible for the following notions:

The major structure for data representation is ECMA_value. The lower three bits of this structure encode value tag, which determines the type of the value:

In case of number, string and object the value contains an encoded pointer, and simple value is a pre-defined constant which can be:

Compressed pointers were introduced to save heap space.

These pointers are 8 byte aligned 16 bit long pointers which can address 512 Kb of memory which is also the maximum size of the JerryScript heap. To support even more memory the size of compressed pointers can be extended to 32 bit to cover the entire address space of a 32 bit system by passing “–cpointer_32_bit on” to the build system. These “uncompressed pointers” increases the memory consumption by around 20%.

There are two possible representation of numbers according to standard IEEE 754: The default is 8-byte (double), but the engine supports the 4-byte (single precision) representation by setting JERRY_NUMBER_TYPE_FLOAT64 to 0 as well.

Several references to single allocated number are not supported. Each reference holds its own copy of a number.

An object can be a conventional data object or a lexical environment object. Unlike other data types, object can have references (called properties) to other data types. Because of circular references, reference counting is not always enough to determine dead objects. Hence a chain list is formed from all existing objects, which can be used to find unreferenced objects during garbage collection. The gc-next pointer of each object shows the next allocated object in the chain list.

The objects are represented as following structure: 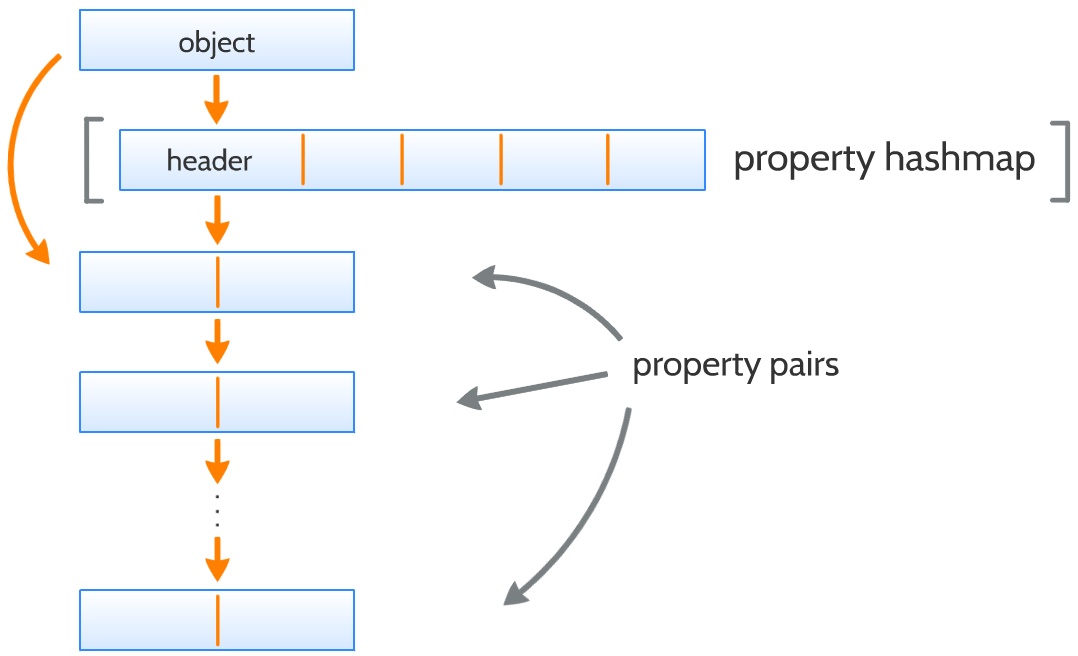 Objects have a linked list that contains their properties. This list actually contains property pairs, in order to save memory described in the followings: A property has a one byte long descriptor, a two byte long name and four byte long value. Hence 14 bytes consumed by a property pair. Another two bytes is used to show the next property pair, so the total size (16 byte) is divisible by 8.

If the number of property pairs reach a limit (currently this limit is defined to 16), a hash map (called Property Hashmap) is inserted at the first position of the property pair list, in order to find a property using it, instead of finding it by iterating linearly over the property pairs.

Property hashmap contains 2n elements, where 2n is larger than the number of properties of the object. Each element can have tree types of value:

This hashmap is a must-return type cache, meaning that every property that the object have, can be found using it.

LCache is a hashmap for finding a property specified by an object and by a property name. The object-name-property layout of the LCache presents multiple times in a row as it is shown in the figure below.

When a property access occurs, a hash value is extracted from the demanded property name and than this hash is used to index the LCache. After that, in the indexed row the specified object and property name will be searched.

Collections are array-like data structures, which are optimized to save memory. Actually, a collection is a linked list whose elements are not single elements, but arrays which can contain multiple elements.

In order to implement a sense of exception handling, the return values of JerryScript functions are able to indicate their faulty or “exceptional” operation. The return values are ECMA values (see section Data Representation) and if an erroneous operation occurred the ECMA_VALUE_ERROR simple value is returned.

Every ECMA value stored by the engine is associated with a virtual “ownership”, that defines how to manage the value: when to free it when it is not needed anymore and how to pass the value to an other function.